Since 1776 and 1789, every generation of Quebecers has wanted to change the constitution of their home country, through profound reform or other means.

For some 225 years, the populations of Quebec were subjects of the Kings of France.

In the early days of the French colonization, the French subjects were under the dominion of trade companies in all parts of New France (Canada, Acadia, Louisiana etc.). Until 1663, a succession of different trade companies, the Compagnie de Rouen (1613 to 1620), Compagnie de Montmorency (1621 to 1627), Compagnie des Cent-Associés de la Nouvelle-France (1627-1645) and Compagnie des Habitants (1645-1663), were responsible for the administration and development of the Laurentian colony popularly called Canada. 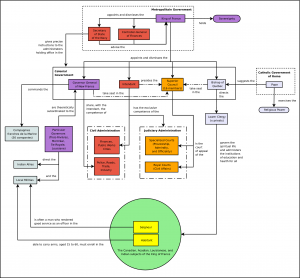 In 1663, New France was turned into a royal province of the Kingdom of France. Examples of other provinces of France at the time were Poitou, Saintonge, Aunis, Picardy etc. New France being an immense territory many times larger than France itself, the provincial government was divided into administrations that were largely autonomous from each other. Canada was itself divided into three districts (Québec, Trois-Rivères and Montréal) each having its own government.

The colony of Acadia, ceded to Great Britain with the Treaty of Utrecht in 1713, never had the time and resources to give itself a full set of provincial institutions.

The immense colony of Louisiana, founded in 1699, remained under company rule (Compagnie de Crozat, then Compagnie des Indes) until 1732, when the royal government was implanted. By the 1750s, Louisiana had a full set of provincial institution and was largely autonomous from the central government of New France located in Canada. 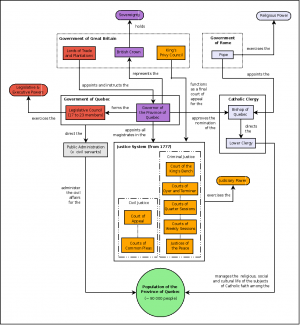 Constitution of the Province of Québec, 1775

In 1763, French Canada is given the name of Province of Quebec. However, the inhabitants of the country will stubbornly continue to call themselves Canadiens for a very long time... 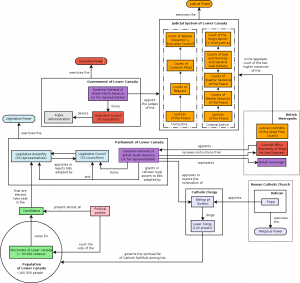 Constitution of the Province of Lower Canada, 1792

Quebec elects a minority of the members of the federal parliament, however Quebec's Franco-Catholic majority can take control of the Parliament of Quebec if they can only get the Catholic clergy to stop interfering in temporal affairs.

Beginning of a long saga to reform the constitution of the Dominion of Canada. Quebec demands the respect of its exclusive provincial powers by Ottawa, bilingualism in the other provinces too and a decentralization of federal powers so that Canada be a real binational confederation.

What does Québec want? Independence!!! Sovereignty of the people!!! Home Rule!!! Self-Government!!! Call it want you want!