From Independence of Québec
(Redirected from St-jean-baptiste-society.html)
Jump to navigation Jump to search

Under the presidency of Guy Bouthillier, and with Robin Philpot as director of communications, the St-Jean-Baptiste Society of Montreal thrived to reach out the various cultural communities of Québec. Contrasting sharply with the images frabricated by the steady flow of articles written by mercenary columnists paid to stain the reputation of Québec's nationalists (by accusing them of xenophobia, anti-semitism, and other absurdities), the society's honest efforts to create ties among Quebecers of all origins and mother tongues did not go by unnoticed. 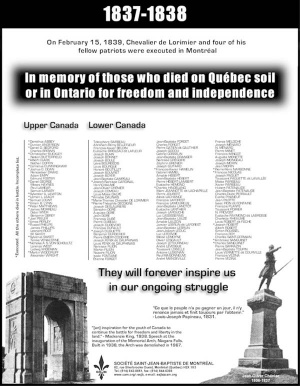 On February 15, 1839, Chevalier de Lorimier and four of his fellow patriots were executed in Montréal.

In memory of those who died on Québec soil or in Ontario for freedom and independence.

[Long but incomplete list of names of men who were executed or died in battle.]

They will forever inspire us in our ongoing struggle.

"[an] inspiration for the youth of Canada to continue the battle for freedom and liberty in the land." - Mackenzie King, 1938, Speech at the inauguration of the Memorial Arch, Niagara Falls. Built in 1938, the Arch was demolished in 1967. 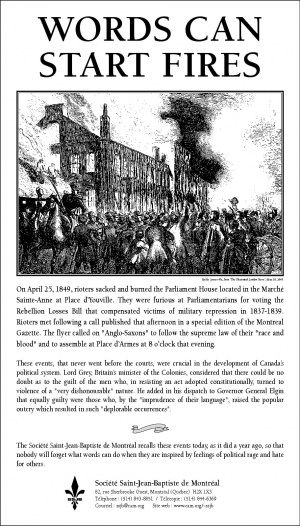 Burning of the Parliament in Montreal on April 25, 1849

On April 25, 1849, rioters sacked and burned the Parliament House located in the Marché Sainte-Anne at Place d'Youville. They were furious at Parliamentarians for voting the Rebellion Losses Bill that compensated victims of military repression in 1837-1839. Rioters met following a call published that afternoon in a special edition of the Montreal Gazette. The flyer called on "Anglo-Saxons" to follow the supreme laws of their "race and blood" and to assemble at Place d'Armes at 8 o'clock that evening.

These events, that never went before the courts, were crucial in the development of Canada's political system. Lord Grey, Britain's minister of the Colonies, considered that there could be no doubt as to the guilt of the men who, in resisting an act adopted constitutionally, turned to violence of a "very dishonourable" nature. He added in his dispatch to Governor General Elgin that equally guilty were those who, by the "imprudence of their language", raised the popular outcry which resulted in such "deplorable occurrences."

The Société Saint-Jean-Baptiste de Montréal recalls these events today, as it did a year ago, so that nobody will forget what words can do when they are inspired by feelings of political rage and hate for others. 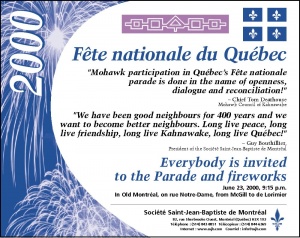 Celebrating the Fête nationale with the Mohawks on June 24, 2000

Everybody is invited to the Parade and fireworks.
June 23, 2000, 9:15 p.m.
In Old Montréal, on rue Notre-Dame, from McGill to de Lorimier

On this day 168 years ago, the Jewish "Magna Carta" of rights became law in Québec (Lower Canada), thus giving full political emancipation to Jews for the first time in the British Empire. Quebec preceded the United Kingdom by 27 years.

The bill was inspired by the great tradition that began in the 18th century with the American Declaration of Independence on July 4, 1776 and the French Declaration of the Rights of Man of August 26, 1789. It became law thanks to Louis-Joseph Papineau and the Patriot Party whose leading members included the founders of the Société Saint-Jean-Baptiste de Montréal. 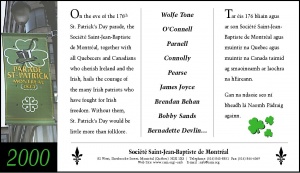 On the eve of the 176th St. Patrick's Day parade, the Société Saint-Jean-Baptiste de Montréal, together with all Quebecers and Canadians who cherish Ireland and the Irish, hails the courage of the many Irish patriots who have fought for Irish freedom. Without them, St. Patrick's Day would be little more than than folklore.