The Man from Quebec with a Message for Scotland

From Independence of Québec
(Redirected from User:Liberlogos/The Man from Quebec with a Message for Scotland)
Jump to navigation Jump to search

The Man from Quebec with a Message for Scotland
Ronald Faux
June 17, 1975

René Lèvèsque (sic) speaks in a soft Canadian drawl, but his manner is intensly French. He is president and a founder of the Parti Quèbècois (sic) which aims to separate the province from the rest of Canada on account of Quebec's seperate identity, language, culture, customs and the "raw deal" it receives in the Canadian Federal system. 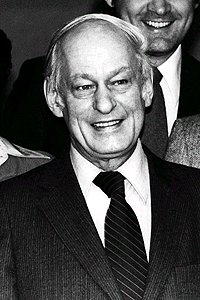 The intense arguments and the pressure which an active minority is inflicting upon the established political system has an exact echo in the Scottish Nationalist Party's (sic) campaign for independence. "There are many parallels but we are further along the road, I suspect", said M Lèvèsque.

He was in Edinburgh at the weekend, addressing a conference on devolution in education organized by The Times Educational Supplement, Scotland. "I notice the same feeling here and the same kind of dismay about the central government system. For example, my taxidriver from the airport was complaining strongly that the first oil from North Sea was going direct to London. You can feel that Scotland is very much aware of a separate identity but is also becoming more frustrated. In that way we are very sympathique."

Even the figures are similar. Quebec has a population of six million, Scotland slightly fewer. At the last election the Parti Quèbècois (sic) won 30 per cent of the popular vote with a strongly indèpendentists (sic) campaign. The SNP has similar percentage but, like the Quebec separatists, won only a handful of seats. Not surprisingly, both parties share a wish for an electoral system based on proportional representation.

M Lèvèsque is a short, wiry man in his early 50s. His features are bunched pugnaciously into an expressive face. He chain smokes his way through an interview and conducts the conversation with empathic gestures. Yes, he did hope to meet members of the SNP. They would have much in common to discuss. Scotland wanted an assembly and more control over Scottish matters but Quebec already had its own Parliament with power to impose taxes, to legislate and to administer.

"I think Scotland is pushing towards this but will find, as we say, appetite comes with eating. Once there is some control there is a wish for far more. We realize now that unless Quebec has real control of the central purse strings and overall fiscal policy, we will not have true independence." The party produced a policy document "Quand nous Serons Vraiment Chez Nous", which was intended to be a close practical look at the economics of independence. The ruling Liberals concede that the analysis was feasible but not desirable. Many Canadians, particularly the "white (sic) Anglo-Saxon Protestants" (Wasps to the Quèbècois) (sic) were dismayed at the prospect of six million people, about one quarter of the population, hiving themselves away to independence.

Scots who suspect the success of the SNP has been unrealistically based on the protest votes of those who would return either to the Tory or Labour Party in an emergency, have their counterparts in Quebec. "We read a lot about nationalism in Scotland perhaps because there are many Scottish people settled in Canada and because there is a similar situation. It seems that many Scots wish to use independence as a tool to put pressure on the Government, but when it came to the point of actually breaking away they would back down. That tactic has a law of diminishing returns. I suppose, like the Scots, we are driving these people towards the point where at a referendum they will have to decide which side of the fence they want to be."

Quebec had become, he declared, what many Scots feared their own country would become. Real power had been concentrated in a few select hands, there was too mush reliance on "branch plants" and the numerous layers of Government were creating stagnation. Canada had 11 senior Governments and, at the last count, 200 standing federal provincial committees. The effect is a stifling jungle where people become more and more lost. On top of this are the regional administrations overlapping and duplicating the federal layers and contradicting one another. "We want to get out from under and reduce the whole bureaucracy to manageable size. That means independence", he said.

The Parti Quèbècois has succeded rapidly since it was formed in 1968, rejecting "slush funds" or financial help from trade unions of industrial groups. It is the main Opposition party in the National Assembly, although at the last election M Lèvèsque lost his seat. He dismissed this loss with a Gaelic shrug of the shoulders and declared the PQ was on the threshold of winning a provincial election, which could provide the party with the votes for a separatist mandate. A scandal currently brewing within the Government, and a growing dislike for the Federal system in Quebec would, he claimed, turn the tacticial voters into firm supporters. Quebec has proved it has the industry, the raw materials, a distinctive legal system, the administration and the will for independence. This list of claims, set beside the Scottish situation, gives a string impression of deja vu.

This is an article from The Times newspaper of London (June 17, 1975, p.14), from The Times Digital Archive available at the Gales Databases website, in turn available with a membership of the Bibliothèque nationale du Québec.