SUMMARY: In recent years, Quebec has produced a popular and powerful movement united by aims fundamentally opposed to the status quo of this province. The movement is characterized by a strong separatist, left-wing ideology, and a broad representation from labour and professional classes. This volume presents a radical and comprehensive analysis of the movement and its roots in the economic, social and historical conditions of Quebec. It is sympathetic to the movement's goals, and as such is a unique contribution to the present debate on Quebec's future[1]. ON THE BOOK: Richard Jones (RHAF, 1974) ONLINE: classiques.uqac.ca 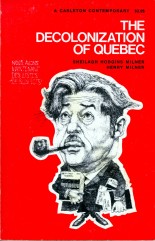