Observation on the current state of Canada
and the political dispositions of its inhabitants,
submitted, to citizen Genêt,
plenipotentiary minister of the French Republic
to the United States of America
Henry-Antoine Mézière
June 12, 1793

Canada is divided in two provinces (Upper and Lower Canada) and extends almost 200 miles. To preserve and defend the possession of this part of America, the English have in the current circumstances no more than 6,000 men, several battalions having been sent this spring to the Islands. These troops are divided between Quebec (the capital) Île-aux-noix, the Lake Champlain, St-Jean, Chambly, Detroit, Gaspé and MisshilimaKinac. The government persuaded of the insufficiency of these troops to keep Canada, has had several battalions of militia raised since France's declaration of war against England. But it would be quite a weak barrier to oppose in case of invasion; because in addition to the jealousy which reigns between the militiamen and their officers who are all dandies, it is notorious that the Canadiens are not interested in leaving their occupations to defend posts which only the King, they say, may find beneficial to preserve. And the government is so wary of the insurrectionary spirit that it has not yet provided weapons to the militiamen, keeping them for just in time distribution.

The Canadiens owe the French Republic the constitution a little less arbitrary than their first, which was granted to them in 17911. In both provinces of Canada, there is a Lower House, a hereditary Senate and a Lieutenant Governor holding a nice veto: and it is this hermaphrodite body which is responsible to make laws. In the province of Lower Canada, the oldest and most populated, the Lower House is almost entirely made up of Canadiens and one counts in it three French-born who are true republicans. It is with delight that last winter I saw this House, in opposition with the government, order that the statutory language be the French language, being that of the majority. Notwithstanding the strong veto opposed by the government, the House held on and appealed to the Parliament of England on this stupid veto. What will be the outcome? ... Nobody knows.2 But it is easy to suppose that if the veto is not withdrawn, the Canadiens will have no loathing in shaking up the yoke of their stupefied tyrant.

Independently of this reason which would induce me to have good hopes for the Canadiens, there is in an infinity of other reasons derived from the oppressive way in which they were of all time treated by the wicked English government. The first year after the cession, one saw men, fathers, citizens of good consideration, immediately hung, without any form of trial, under the simple suspicion of non-Royalism and the blood of these unfortunate victims which still runs in some Canadiens, asks for revenge. Peasants were arrested and inhumanly whipped, for the sole crime of not having been able to clear their cars, collapsed in the snow under an enormous load, out of the way to give passage to an English officer walking a prostitute. House owners who strongly held on to their property because in it they had received the last embrace of their expiring fathers, were driven out of them by the infamous Haldimand, without any sort of allowance and saw their properties be used as ornament on the avenues of the this imperious man's castle. Fifteen days drudgeries made the craftsman lose the means of providing for the daily needs of a family. One saw the English in possession of all lucrative offices while honorary ones were hardly granted to Canadiens. Finally, in addition to thousand other local circumstances, the Canadiens see, with the greatest disposition to revenge, their ports closed down to all nations, except England, and their trades of fur and corn monopolized by this cruel mother who fixes at her will the price of these goods and forces Canada to receive her goods and her food in return.

It is to this disposition to revenge that the Americans, in their last expedition against Canada owe the hospitality that they received there. Major Brown had but a small number of men with him and was without food and money, when he received the order of the Congress to advance towards the border. Hardly just entered in the colony he found everywhere help and friends. Assisted by the Canadiens, he seized the various posts successively and soon colonels Livengston, Duggan and Hazen commanded considerable corps of Canadien militiamen: so much that it was over with Canada for George the idiot, had not suddenly arrived in the harbour of the St-Laurent river an English fleet carrying eight thousand troops at the orders of Bourgoyne: which, combined to the lack of weapons and ammunition the Congress had promised and which never came, forced the Americans to give up the battle.

Since that period, the wicked English government, instead of reconciling the inhabitants by softness, has embittered them by new acts of oppression. The partisans of the Americans were obliged to flee and those who remained, were tied up and sent to England. It confiscated the properties of various people and the courts pushed the royal rage to the point of nonsuiting private individuals of their actions, on the sole principle that they were suspected of being rebels and deserving consequently to lose their properties. Cazeau, du Calvet, Jautard, Mesplet, Lusignan and several others still alive suffered these horrors. 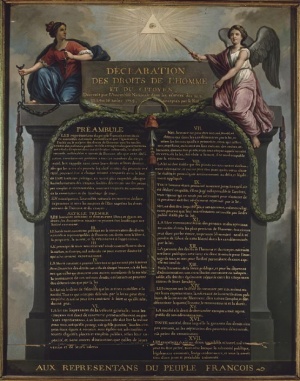 One could object the ignorance of the Canadiens as an obstacle to becoming free, their priests, their prejudices. To this I answer that one has a very imperfect idea of the inhabitants. Those living in towns are in possession of all the philosophical works; they read them with passion, as well as the French gazettes, the Declaration of the rights of man and patriotic songs. They learned how to sing those by heart at the opening of a Club de patriotes, where last year one counted more than 200 citizens. This club even defied the government by publicly discussing the affairs of France, something which, the day before, had been prohibited by a proclamation. The priests in the cities are considered as they should be, I mean to say, as infamous impostors who make use of lies for their own interests; and one looks this race passing by with as little respect as a herd of pigs. I will not speak of this other caste of despicable and scorned men who style themselves nobles; the poor wretches do not exceed ten in number and their ignorance and their gueusery are pitiful. Lastly, I dare state that the French revolution has electrified the Canadiens, and in one year, enlightened them on their natural rights more so than one century of reading could not have accomplished. Even since France's declaration of war against England, such is progress that the Canadiens made in reason, that they do not fear to publicly wish for the French to win. Each day, they assemble in small groups in towns, tell each other the news, are delighted when they are favorable to the French and are afflicted (but do not despair) when they are bad for them.

I swear that the Canadiens love the French; that the death of Capet the tyrant has upset only the priests and the government which fear the transplantation of a guillotine in Canada. I affirm that the Canadiens would rather be butchered alive than to fire a single rifle shot on Frenchmen who would come to offer them freedom; I say more, I say that they would receive it with recognition and that they would be worthy to enjoy it by their courage to defend it. There are only in the province of Lower Canada sixty thousand valiant and robust Canadiens, in a position to crush, on any signal, all the rapacious English who do not exceed (troops included) a number of 24,000 men.

But for a greater certainty of success, in case the French Republic wished to free her brothers, it would be very easy, by means of the right people, to distribute an address in Canada to all the inhabitants in which one would expose the people with the evils they suffered since the cession; the oppression of the wicked English government; their brothers inhumanly sacrificed to its suspicions and its revenge, their trade monopolized by an unbelievable trickery; finally the absence of the arts and the belles-lettres which one would attribute to the homicidal policy of England. To this tableau one would oppose a painting of the advantages which trade and letters would receive from the opening of the ports of Canada to all nations; the softnesses that there are to make the law by oneself, without being subjected to the insolentissime veto of a capricious good-for-nothing who shuts the mouth to a whole people; the positions which the Canadiens could apply to under a free constitution; finally, one would promise the protection of the French to them, if, rising as they did from their lethargy, they courageously wanted to make the sovereignty of their nation succeed to the sovereignty of George III (and the last, I hope) who, according to even the testimonies of his own Parliament and of his doctors, is an idiot, a non compos mentis. But we must be wary to publish this address only at the very moment of the French forces' arrival on the borders of Canada; because in giving it too early, one would run the risk of seeing, in the intermediary, the ardour which it could have given birth to, die out.

If I did not put good order to my narration, at least I flatter myself that it does not lack in frankness nor impartiality. In case you need further details, I will give them in person and I will be at your disposal at any hour of the day. If generous feelings, fruit of the touching interest which France takes in the happiness of peoples, urged the National Convention to break the shameful irons in which groan Frenchmen's sons, sold by a king, citizen minister, you will reward my good citizenship by giving me the occasion to join their brave liberators, to avenge them, or to die gloriously as a combatant of freedom and equality. I have no other passion but that one, except this sincere regard one must have for the virtue and patriotism proclaimed by the public voice; and the recognition due to a man who accommodated me as a brother and effectively proved me, by his behaviour, that I did not run after a phantom, when I left my country, without any other resource but my courage, to seek in the arms of the French the freedom of which I could not see any trace of in Canada.

1. A private and secret letter, dated October 20, 1789, from Home Secretary Lord Grenville to Governor Lord Dorchester, provides a convincing proof of this assertion: "I am persuaded that it is a point of true Policy to make these Concessions at a time when they may be received as matter of favour, and when it is in Our own power to regulate and direct the manner of applying them, rather than to wait 'till they shall be extorted from Us by a necessity which shall neither leave Us any discretion in the form, nor any merit in the substance of what we give."

2. The veto was not withdrawn, and the final outcome was to declare English the only statutory language of even the French civil law, but to allow a French translation.