History of Quebec For Dummies

SUMMARY: "Grasp the unique history of Quebec? Easy. Packing in equal parts fun and facts, History of Quebec For Dummies is an engaging and entertaining guide to the history of Canada's second-largest province, covering the conflicts, cultures, ideas, politics, and social changes that have shaped Quebec as we know it today. "My country isn't a country, it is winter!" sings the poet Gilles Vigneault... Indeed, Quebec is winter, snow, cold, and freezing winds. It is also the majestic river Saint-Laurent and its numerous confluences across America. It is vast, dense forests, countless lakes, magnificent landscapes of Saguenay, Charlevoix, Côte-Nord, or Gaspésie. Quebec is also the "old capital" perched on the Cape Diamond facing the sea. It is Montreal, the first French city of North America, the creative and innovative metropolis, junction for different cultures and heart of a nation yearning to belong to the world's history. History of Quebec For Dummies tells Quebec's fascinating story from the early fifteen hundreds to the present, highlighting the culture, language, and traditions of Canada's second-largest province."[1] BUY ONLINE: Dummies.com, Wiley.com, AbeBooks.com, Amazon.com, etc. 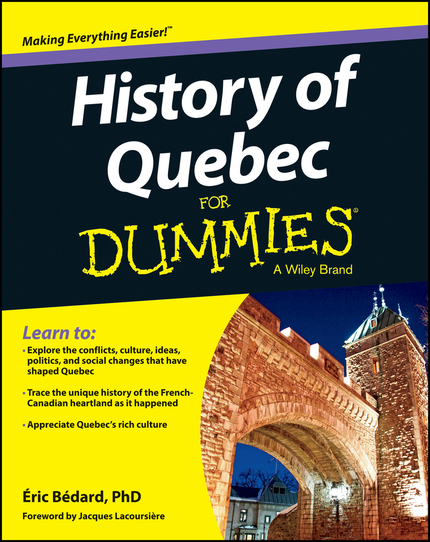