English speakers for the independence of Québec

Throughout history, a considerable number of native speakers of the English tongue have come to understand, love and identify with Quebec in the way the majority of Quebecers do. Often through assimilation, but not always, numerous Irish, Scots, English, Americans and Canadians have come to see themselves as full members of a French-speaking society that has always, in spite of the colonization context, treated immigrants of British origin or descent with the respect all human beings deserve.

Quebec nationalists are engaged in a battle that is directed not against individual English speakers, not against English speaking nations, not against the English language, but against the injustice of imperialism and colonialism. It just happens that in Quebec's case, the colonizing power was British and later British Canadian. On every occasion we have, we also denounce the imperialism and colonialism of all other powers. The only relations that we accept between nations are the ones based on mutual respect, equality and fraternity.

Among those people of foreign origins who joined Quebecers in their fight for independence, natives of the British isles and the various regions of the world colonized by the British government, account for a very important part.

Below is a list of some of these courageous individuals who sided with the truth, justice and humanity, even if it meant being called traitors by ignorant people or in some cases people whose hearts were filled with hatred of all things remotely French or Catholic. Better to be wrongfully taken for a traitor than to be a traitor to humanity an to one's own conscience. 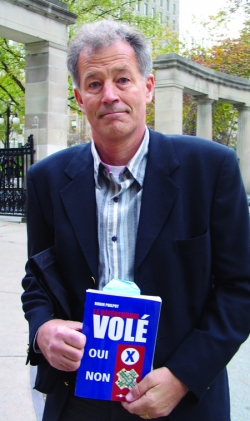 Native of Thunder Bay in Ontario, teacher, author, journalist and translator. He lived in Africa where he was teaching history and moved to Quebec in 1974. He became director of communications of the Saint-Jean-Baptiste Society of Montreal in 1999. He was a Parti québécois candidate for the Saint-Henri-Sainte-Anne riding in the Quebec general election of 2007.

A native of Scranton, Pennsylvania, urbanist, author and activist. She supported the Sovereignty-Association movement founded by René Lévesque and later the Parti Québécois. She wrote a book to try to convince English-speaking Canadians that Quebec and Canada could separate peacefully, for the benefits of both nations, giving the case of Norway and Sweden as an example case. 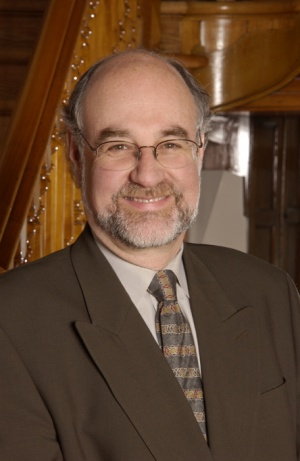 Native of Quebec, former PQ candidate in 1979, Hospital administration. He was again a candidate of the PQ in 2002, but was not elected. He nevertheless became delegate minister for the Health department in 2002. 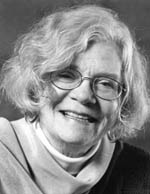 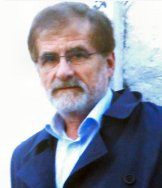 Born in Quebec, Henry Milner is a professor of political science at Vanier College in Montreal, at Université Laval in Québec City, and Umeå University in Sweden. He was the Quebec correspondent for the Chicago weekly newspaper In These Times. He is president of the Société québécoise de science politique (Quebec Society of Political Science)

Native of Ontario. Former member of the National Executive of the Parti Québécois. Bloc Québécois candidate in 1995 for the riding of Westmount--Saint-Louis. President of the Parti Québécois association of Outremont from 2003 to 2005. First English-speaker to sit at the General Council of the Saint-Jean-Baptiste Society in the organization's contemporary history.

Native of Ontario. Trade unionist and former president of the Greater Montreal Central Committee of the Confédération des syndicats nationaux trade union. Candidate in Saint-Henri-Sainte-Anne for Québec solidaire in 2007, he is now the official Climate and Energy Campaigner for Greenpeace Canada, succeding Steven Guilbeault.

Anti-Poverty activist from the Outaouais region, he has been twice candidate for the party Québec solidaire and gained fame in the infamous "Chrétien Handshake episode, when Prime Minister of Canada Jean Chrétien took Clennett in a chokehold, threw him to the ground and broke his tooth. This happened less than four months after the 1995 referendum on independence, at a Canadian Flag Day celebration. The protest he was taking part was against proposed changes to the unemployment insurance program, but minister Sheila Copps said to the media that the protesters were "separatists". 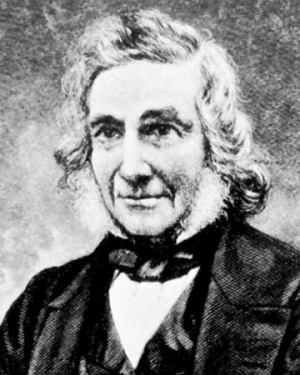 William Lovett, leader of the Chartist movement of England

William Lovett, one of the founders of the Chartist movement, wrote an address to the people of Lower Canada (Quebec) in support of their efforts to resist the unconstitutional decision of the British government to take money from the Provincial Chest without the assent of the Legislative Assembly of Lower Canada. He also wrote a petition to support the cause of the people in Lower Canada. 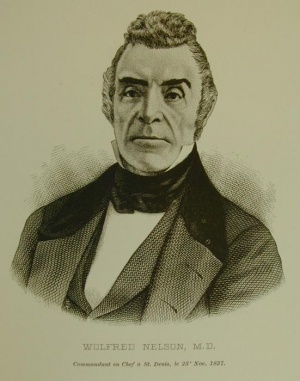 Born in 1791 in Montreal, he studied medicine. In 1827, he was elected Member of Parliament, but gave up active politics in 1830, without disavowing his reformist allegiance. He became a patriot leader in the region of the Richelieu river valley, and supported the use of arms at the Assemblée des Six-Comtés in 1837. He lead the patriots of St-Denis to victory, and was arrested soon after. Exiled to the Bermudas in 1838, he came back to Montreal in 1842, and in 1844 was elected to the new Parliament of Canada. In 1854, he became mayor of Montreal. He died in June 1863. 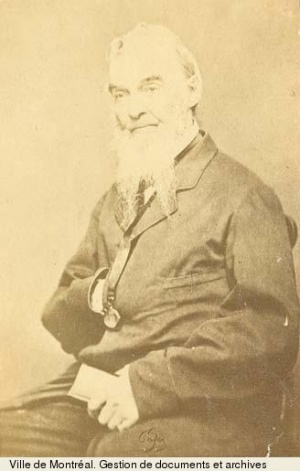 Born in 1794 in Montreal, brother of Wolfred. He also studied medicine, and obtained great fame as a surgeon. He was elected Member of Parliament in 1827, and although he did not take part in the 1837 armed resistance, he was imprisoned for it, but released thereafter. He immediately left for the United States. He organized the invasions of 1838 from the United States and participated to both armed conflicts of that year. In February 1838, as provisional President of the Republic, he distributes a Declaration of Independence of Lower Canada. After the failure of the second attempt at setting up a Republic, he fled to the United States again, where he practised medicine in California. He died in New York in 1873. 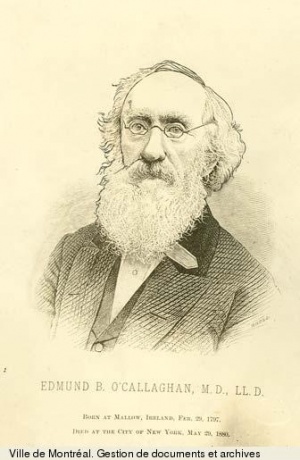 Born in Ireland in 1797, he studied in Paris and came to Canada in 1823. He began practising medicine from 1827. A close friend of Papineau, he became the editor of the Montreal Vindicator in 1832, and showed to be an irreducible adversary of Lord Gosford and the status quo. In 1837, a mandate of arrest was emitted against him, and he sought refuge at St-Denis. He then crossed the American border with Papineau. Later, he became secretary-archivist of the State of New York, and died there in 1880.

Editor of the The Canadian Spectator.

Born in Ireland in 1794, he studied at the Trinity College in Dublin, and later presumably at the Royal College of Surgeons. He practiced medecine and surgery in his home country. He arrived in Lower Canada in 1825 and settled in Montreal. On December 12, 1828, he founded the bi-weekly newspaper The Irish Vindicator and and Canada General Advertiser which later became the The Vindicator and Canada General Advertiser. In 1832, after writing that the Legislative Council was a public nuisance, he was arrested for defamation along with Ludger Duvernay of La Minerve and was sent to prison from January 17 to February 25. He was elected in the Montréal-Ouest riding on May 22, 1832. He died in service on July 18, 1832 at the age of 38, during the cholera epidemic. 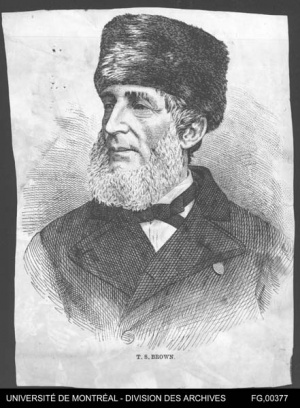 Born in New Brunswick, speaker, journalist. He was General at the Battle of St-Charles. He was wounded during the street fight between the Fils de la liberté and the Doric Club and resisted to his arrest in November 1837.

I had for years been a steady adherent of the Papineau Party, at a pecuniary and social sacrifice, inevitable to him who is separated from those who may be considered his own people, and found in stormy times ranked with an opposing party, alien in blood and language. The reply to that article of the capitulation of 1759, which required safe guard for the Canadians was, "They are subjects of the King." In 1791, a free Parliament was granted to them, and it appeared to me that manliness in the British people forbade the withholding of any right from a handful of French descent, that the fortunes of war had left in British territory. I saw, too, in their pretensions, the same principle that had been consecrated by the triumphs of the British Commons in their victories over the "Prerogatives" in time past; and felt that an instinctive dread of French supremacy, which I could not share, alone prevented the entire people from making common cause against such a Government and Colonial Office as we had. There was something excitingly chivalric in devotion to a cause where one had everything to lose and nothing to gain. -- From 1837 and my connection with it, 1869