By Jacques Rouillard, professor at the history department of Université de Montréal

The tendency to put the media's spotlights on the fascist and anti-semitic groups acts like a deforming mirror and leads to the unduly exaggeration of their importance in the French-speaking society of the time. 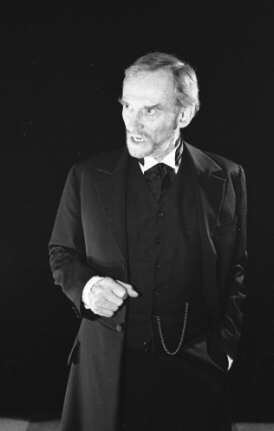 Jean-Louis Roux's confession revived the debate around the presence of a Nazi, fascist and anti-semitic current in Quebec in the 1930s and 1940s. He admitted to have worn a swastika on his laboratory coat and to have taken part in a "riot" in Montreal where groups of young people, en route to ransack the offices of the newspaper The Gazette, broke the windows of stores belonging especially to Jews. Indeed, there were groups and some intellectuals who expressed fascist and anti-semitic inclinations and particularly in the 1930s. But the late tendency to put the medias' spotlights on these groups acts like a deforming mirror and leads to the unduly exaggeration of their importance in the society of the time.

The demonstration in which Jean-Louis Roux took part occurred after the assembly organized by the Ligue pour la défense du Canada in February 1942 to protest against the decision of the federal government to hold a pancanadian referendum to free itself from the solemn promise it had taken not to impose conscription for overseas service. The promise made in 1940 by the federal politicians particularly aimed French Canadians who were known to be refractory to sending conscripts to fight over in Europe. On should note that the French-speaking nationalist groups were not objecting to conscription for the defense of Canada or to the sending of volunteers, but they were opposed to the obligation of the conscripts to serve overseas1. They perceived the conflict as another imperial war where Great Britain wanted to involve Canada without this last one having interests important enough to force her young people "to pay the blood tribute". In their eyes, the participation of Canada should be moderate, especially economically and by having recourse to volunteers to help the British military forces. 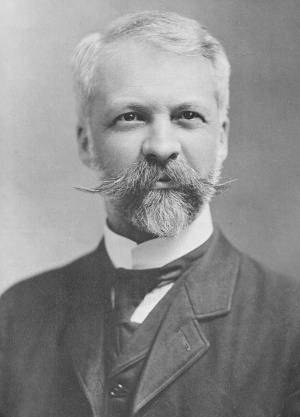 The speakers at the assembly organized by the Ligue de défense du Canada (8,000 to 10,000 people) were indignant at the decision of Ottawa to reconsider its promise and they advised people to vote "NON" in the upcoming plebiscite. There was nothing in their remarks which was anti-semitic or sympathetic toward Germany. The principal speaker, Henri Bourassa, founder of Le Devoir and well-known to have denounced anti-semitism among his own, preached for calm and moderation2. The advice was not taken by all since young people spread out in the streets of Montreal after the demonstration. Some were singing Ô Canada to display their attachment to their country (autonomy) and burned the British flag, symbol of the dependence of Canada towards Great Britain. They also went to attack the offices of the strongly conscriptionnist newspaper The Gazette and, to show their frustration, they broke the windows of trams and shops, particularly those of the Israelites saying "Down with the Jews". These last two elements are obviously revealing of the anti-semitism of these groups. But the assembly as such was not directed against the Jews and the speakers were careful to present their point of view as Canadians and not as French Canadians.

The Ligue de défense du Canada succeeded in channelling the dissatisfaction of French Canada even if the majority of the information media were on the side of the government and war censorship was weighing on them. The results of the plebiscite showed a major cleavage between French-speaking people and English-speaking people in Canada: Quebec voted "NO" at 71% and the remainder of the country voted "YES" at 80%. If we could isolate the French-speaking vote in Quebec, we would see that it was probably more than 80% of the French-speaking people who voted "NO". The French Canadians once again realized their status as a minority in Canada when came the time to decide on an important issue. After the referendum, the Ligue pour la défense du Canada became a political party, the Bloc populaire canadien, which presented candidates at the provincial elections of 1944 and the federal ones in 1945, with a program that was as moderate as can be.

In the 1930s and 1940s, national-socialism (Nazism) found a rather weak support in French Canada and even less during World War II. The group which incarnated it best in Quebec, the Parti national social-chrétien founded by Adrien Arcand in 1934, was born in the wake from the economic crisis of 1929. Beyond the exaggerations of the newspapers and leaders of the group, the party's membership did not exceed 1,800 members for the whole of Canada according to certain leaders who defected from the group3. As historian Martin Robin showed, the French-speaking people were far from having the monopoly of this kind of movement. Other fascist groups developed in English Canada where a feeling of antisemitism was floating before World War II (Blue Shirts of Canada, Canadian Union of Fascists, etc.). Moreover, in 1938, the party of Arcand merged with anglophone fascist groups to become the Parti de l'Unité nationale. The entry of Canada in the war discredited all these groups completely, including that of Arcand, in Canada as in Quebec.

The attitude of the newspapers 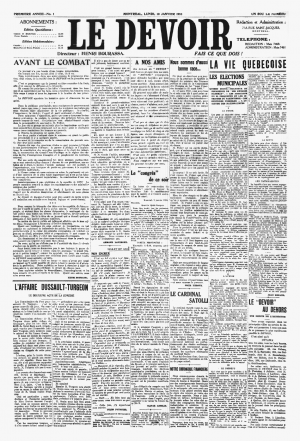 In the analysis that certain authors give of Fascism and anti-semitism among Quebec's French-speaking people during this period, there unfortunately is a reflex to identify French Canada with its most conservative tendencies, either to certain monthly journals and daily newspapers like Le Devoir [of Montreal] and L’Action catholique of Quebec City. These newspapers were founded to oppose a counterweight to the daily newspapers with great pulling which La Presse and Le Soleil were and they vigorously defended the social teachings of the Catholic Church. These last two daily newspapers had pullings that were much higher than those of the catholic newspapers: La Presse sells 177,000 copies in 1942, Le Soleil sells 75,000, L’Action catholique 70,000 and Le Devoir 17,000 (ABC). As historians began to take interest in these newspapers, their work showed that they were animated by a liberal vision of society and that they propagated a discourse quite different from the clerical-conservative press, including on the subject which is our focus now.

As soon as Hitler seized power in Germany in 1933, La Presse, Le Soleil and Le Canada, organ of the Parti libéral, very severely criticized the Nazi dictatorship in many editorials and testified of their attachment to democracy4. This press denounced Fascism and anti-semitism as soon as it appeared in the province and it called to tolerance with regard to the Jews. The newspaper Le Canada, whose contents for the whole period is better known, was made the champion of the Jewish cause during the 1930s and 1940s. An opinion newspaper like Le Devoir, it had a comparable pulling for all this period (15,000 in 1942). Its leading articles fustigated anti-semitism and took the defence of the Jewish minority. During World War II, it very early denounced Jewish persecutions in Germany and started to report of their extermination at the end of 1942. […]

As we know, the attitude of the clerical-conservative press was tinted with mistrust and hostility towards the Jewish community. During the war, it started to report on the extermination centres against the Jews in Europe only in 1943 and it did so less often than Le Canada. It really covered it completely at the end of the war. After the conflict, it was more reserved on the subject but always suspicious and critical of the actions of the Jews until the end the 1940s.

Many nuances are necessary, especially since in Quebec this current comprises an important anti-State dimension because of the clerical influence. I shall only point out the attitude which Le Devoir could have had towards the fascist regime since the Roux Affair led several people to ask questions. I use as a starting point Paul Gareau's master's thesis in history which deals precisely with the attitude of the newspaper with regard to these regimes. Starting from the middle of 1930s, the daily newspaper became very critical of the Nazi regime when it started to persecute the Catholics and Jews and that it represented a threat for peace in Europe. With the war, it painted a picture of it which was as sinister as that of the USSR, which is not little to say for this Catholic newspaper. The paper's assiduous readers can only feel aversion for the regime especially since Mgr Gauthier, archbishop of Montreal, condemned Arcand's group in 1938 and Nazism in 1940.

Regarding Italy, the newspaper presented a rather positive image until 1938, year when the Duce united his cause with that of the Führer and when the pope denounced with force the racist and fascist doctrines of Mussolini. Two years later, the condemnation was complete when Italy cunningly attacked France.

For its part, Franco's cause received a complete support of the newspaper for which the civil war in Spain (1936-1939) is a fight between Catholicism (Franco) and atheistic Communism (Republicans). During the war, the interest for Franco's regime became marginal. As for the Quebec's fascist groups, the newspaper payed little attention to them and did not take them seriously.

Thus, to characterize the French-speaking Quebec of 1930s and 1940s as a fascist and anti-semitic society lacks in nuance, to say the least.