The Union and Nationality

The Union and Nationality
Editorial
in L'Avenir, April 15, 1848 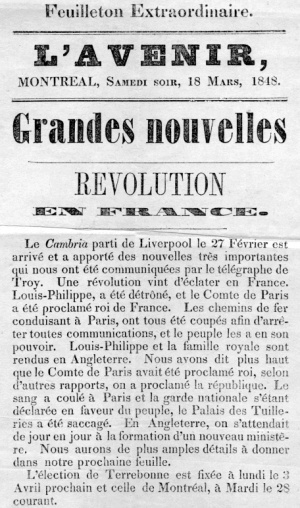 L'Avenir of Montreal, special edition of March 18, 1848 reporting on the Revolution then simultaneously occurring in France, Germany, Italy, Poland, Austria and Roumania

For a long time compressed and choked in the name of public interest, the attachment to the nationality which characterizes us, seemed destined to become one of those prejudices which we can hold dear to the heart, but that reason proscribes as a weakness, an error of feeling. Nobody dared to claim [anything] in its name, by interest for a position which we had been led to by a succession of unhappy events; a position considered to be to our advantage, when all the benefits which could result from it were to be obtained at the sole condition of not giving any sign of life as a nationality. It was regarded as an acknowledged obstacle to obtaining political rights; it was necessary to get rid of it, to make abstraction of it, to sacrifice it even; to no longer consider ourselves French Canadians if we wanted to be something in this system of social organization; and thus, under the pretext of merging it, we drowned it in liberalism. The principle of nationality ceasing to be in honour, since we repudiated it by interest, was thus set to be weakened, to lose its moral fibre and soon end up being erased completely. So during nearly ten years, we saw even its name forgotten, and its sleep became so deep that its existence appeared null.

For as long as this state of affairs subsisted, the people of Lower Canada seemed stricken by a complete numbness which paralysed the public spirit. This torpor would still exist if it had not been for the alarm cry fortunately uttered by generous men, friends of their country and devoted to their nationality. They dared to break the silence in spite of its depth, to raise their voice and revive the memory of this nationality, by preaching a doctrine tending directly to its conservation. Why was it not done earlier. Why? Because there were interests imposing silence to us with threatening gestures; because the expectancy of a still dubious political wellbeing turned us timorous, under the pseudonym of careful; and the bad consequences required our national death to later obtain advantages from it, in exchange of this constitutional political freedom that we had so expensively bought along with it. The Union caused us incalculable evils, it weighs on our existence. Allured, amused to some extent by the details, we for a long time lost sight of the goal of this measure which nevertheless revealed itself day by day in this invasion of foreign ideas and institutions on top of our ideas and our institutions; which each day rendered the first desirable in the middle of this confusion of institutions, perfect maze of laws, manners and language; which by imposing a dual nationality to us, tended to make one necessary and the other one useless, that is to say, to make us lose ours by undergoing the other. Such indeed was the success of this machiavellic work. The Union was made with the goal of losing us and indeed loses us.

Subjected to the idea of the impossibility for us to ever see it destroyed, one is able to conceive the resignation, one can imagine the utility, the need for laissez-faire and silence; one can wish that this national death arrives lengthily, indirectly, and it is even conceivable that a people could be in such a position as to participate in the process, like a suicide in a state of hopeless sorrow; but what one cannot conceive, is for this state to be regarded as the best, the most desirable by those who are the victims of it, when one can find a means of returning life to this nationality, were it just for one more century; what one cannot conceive is that there be men who prefer the fusion, the death of this nationality to enjoy the pleasure of being reborn and resurrected in a foreign nationality.

The question of the Union is as follows: do you want the Union with all its advantages at the price of the loss of your nationality? Because it is the condition for it to never be a principle of public action, for it to fall asleep completely, and that is to want it to die. Nationality is the principle of life of peoples and someone rightfully said the silence of a people is death. 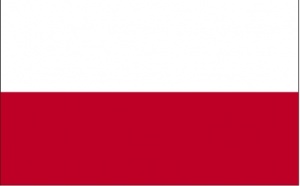 Is there not a reason to be astonished that there are, among us, men who want to maintain a state of affairs so destructive of our life as a people? "But", some will say to us, "you will awake antipathies and national hatreds". By grace, let us tell to these one hundred thousand to conceal their prejudices rather than to make six hundred thousand conceal their just complaints. We want but one thing: the conservation of our institutions, our language, our laws, our manners. Is there something in this which can irritate the national susceptibilities of an honest and sensible man? To obtain that, can we not respect the nationalities and manners foreign to us? Can't the entire history of our struggle with this enemy faction that oppressed us for so long to destroy this nationality, its eternal nightmare, be summed up in this motto of Polish nationality, "freedom for us, freedom for you"? Moreover, would it be decent for six hundred thousand individuals to ask to one hundred thousand to teach them their language, to impose them their institutions because among these one hundred thousand are some bawlers who want to believe themselves oppressed the minute they are no longer the oppressors? These are not considerations that should make us conceal our principles.

It is time for the people to know all the evils that the Union did to them; it is time that we indicate those that they are presently threatened by; it is time for them to knows, that they measure its importance to request its end. If they are unanimous, it will not be refused to them. These events which unceasingly burst in Europe give them guaranties of success. The French revolution is bound to transform the world. The English people, crushed underneath the double weight of their secular and religious aristocracies will perhaps make an effort also. This general conflagration will be able to reach England; it must follow or precede a revolutionary movement in Ireland: and what we can expect as more probable is a war between England and some continental power. With an exhausted treasury, for little that we ask it with energy, England will not be tempted to refuse us this act of justice when it is well-known that in order to maintain a state of affairs not profitable to her, she will need forces and expenses that she could so easily avoid by making of all Lower Canada a colony which could give her, if needed, help and protection against enemies from the outside and the inside. The time of danger will make her more careful and just, but it is necessary for the people of Lower Canada to be ready to ask when this hour will arrive; this hour could resound soon, peace could then be restored for a long time. If we do not take advantage of the circumstances, then the Union will remain, were it to be be declared impracticable and harmful to the interests of all indistinctly. Its maintenance would depend upon the will of the Master who, when he was strong, always showed himself to be little concerned for the just complaints of the weak.

That said, while informing the people of the evils caused by the Union and its inevitable effect, it is wise to also say that we will always support a liberal ministry in power: because we need it today in order to repair the evils caused by its predecessors. Agitation can be done apart from ministerial policy: and until the people are unanimous and the circumstances favourable, we will put under the eyes of our readers all the most important facts on this act of spoliation, of annihilation, this kind of political theft that the century seems to want to repudiate and avenge everywhere today. It is time to express how much it weighs on us. Each day that is spent without drawing public attention to a subject which interests us so highly is a step towards the destruction of our nationality. We will take the initiative on this. We want to offer our weak support to the nationalité canadienne. Whatever little merit we will have had in the end is not important because we will have at least offered the first support, we will have proclaimed its name highly.

We enter this path after a deep reflexion, with firmness, and without ulterior motive, because we are persuaded that this path is the only one that can make us reach our destination. We will not accuse any one of our own; we want the wellbeing and the salvation of all. To have a principle of life, a principle of salvation prevail, a question of existence for the French Canadians, here is the goal to which our conviction points us to, without any consideration being able to divert us from it, and that we will seek to attain until the last hope escapes us.

Once again we repeat it, nationality can unite a people; it can give them the life, the movement and the energy which they need to thrive; the consequence is not for this nationality, because it is united, strong and active, to have bad intentions and to be heinous: no, we believe that this nationality must unite all its members, we believe that nationality will be the banner under which we will walk, we are convinced of it. That those who awaited help, sympathy and collaboration from the French Canadians in this project of reform and progress be not frightened; the support that they received from isolated individuals, they will have it but more regularized, more continuous, more effective, from these same individuals united as a body. Those who know the Canadien character will certify what we claim on this matter. They will say by looking at the past, by considering the national character, that any liberty will find in its midst the cordial, frank and sincere hospitality, which the traveller and the foreigner have always found in our homes.