Militantism and the National Question 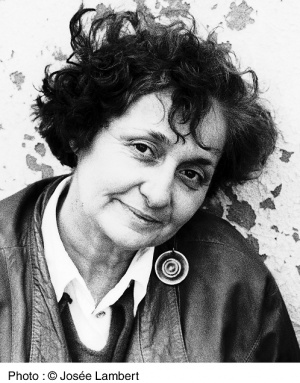 Why are the young people so disinterested in politics?

Here is one of the questions to which I inevitably must give an answer, every time I speak before an assembly, whatever its composition.

Are they really disinterested in politics?

Don't we see them in rising up to the barricades in great number to fight against the destructive effects of the globalization of a system based on economism, scientism and individualism, on the economic exploitation of the natural and human richnesses of all societies, rich and poor, on military research and the sale of weapons?

Don't we see them in great number marching for peace, against a system leading us straight to World War III?

Don't we see them voice for environmental protection, for the equality of women and men, for greater social justice in all its forms?

Don't we met them in great number in the Équiterre movement and multiple associations dedicated to providing daily services to the poor, the junkies, the prostitutes and other victims of our increasingly unequal society?

And who worries about the production of GMO and technologies which manufacture animal clones and, soon, human clones, if not in the majority the young people?

Why do we thus have the impression that the young people ignore politics when the battles that they carry out on these many fronts are all highly political? Wouldn't this be because they do not turn around the central axis which a society project is? And in Quebec isn't any society project indissociably tied to the national question? Our history shows us that indeed Quebec society has always progressed but in the convergence of the national struggle and the social fights, in other words, when the national struggle assumed the social claims.

If the young people give us the impression today that they ignore politics, it is indeed that the national question does not mobilize them in any manner.

Why? Here is the relevant question.

I am coming back from a lecture tour in the Upper Laurentides region, invited by the SNQ of the area to present its members the RIN film and to comment on it with them. I met, every evening, old time militants, aged for the great majority over 40 years old, some having even crossed the 70 years barrier. All were convinced freedom fighters, bitterly disappointed by the incompetence of the Parti québécois to carry out the independence of Quebec, for not having made of it the principal goal of its existence and its action, for not having constantly taken the means to carry out its social democrat program, for not having supported militancy as the privileged form of political engagement in a true fight for national liberation, substituting instead, with the passing of years, the increasingly technocratized and bureaucratized organization of an activity limited to financing campaigns and electoral planning, entirely dedicated to gaining power and maintaining itself in power.

Because it is indeed what it's about.

After having ensured its hegemony on the whole of the independence movement, by fear of losing the control of its troops, the Parti québécois killed militancy as the free and costless expression of the political engagement of those who were ready to pay with their person and to take the time it takes to see the desire for the political independence of Quebec progress in the conscience of the people; political independence being conceived as the sole means of realizing a society project to the measure of their needs, their aspirations, and their values.

Perhaps are they still under the influence of the film which shows the effervescence caused by such a project of national liberation, in the years 1958-1968, but all the people who spoke in places where I presented it, including those of less than thirty years, deplore the current absence of a movement where they could again militate for independence, rather than to be destined to accomplish rigorously framed and partisan tasks. Activities, moreover, more and more often remunerated or, at the very least, whose expenses they involve are refunded.

This conception of political activity is now so well anchored in the manner of being and acting of the Parti québécois that from the start it evacuates the relevance of a real militancy, even in this moment when it claims to want to retake the flame of the cause of independence. Therefore, its president, who is also Premier, hastened to publicly examine the proposal of Mr Parizeau to finance the resumption of the debate, even if it also means financing that of the adversary.

How did we manage to start believing that a people can escape their secular impotence and take their destiny in their own hands by paying communication professionals and advertising mercenaries to make the people aware of the need and the urgency of giving themselves a country if they want to shape it to their own image and their own way of doing things?

How did we manage to start forgetting that only militants, freely committed, with conviction and determination, in their family and work milieus, in the school and in vicinity, can be the catalysts of the political intuition of the majority of the people, that in Quebec, under no circumstances would it be possible to resolve the social problems without resolving the national question and conversely.

When all those who carry the independence project can be mobilized to fight along with the young people in order to create a free and just Quebec society, starting from their own problems, concerns and objectives and which are those of our time, then the young people will necessarily be interested in the national question since it remains the paramount question.