Manifesto of the Action libérale nationale

Translated by Mathieu Gauthier-Pilote from: Manifeste de l'Action libérale nationale. This program, far from being a secessionist program, is significant in that it shows where Quebec was at in the 1930s. A great percentage of people, 29.48% of the electorate to be precise, voted for this party at the Quebec general election of 1935. In 1936, the new Union Nationale party caught the votes of those same electors who found themselves favouring Maurice Duplessis's conservative party instead. The implementation of the Action libérale nationale's program occurred a whole generation after, in 1960, with the election of the Liberal Party of Quebec. [1] [2]. 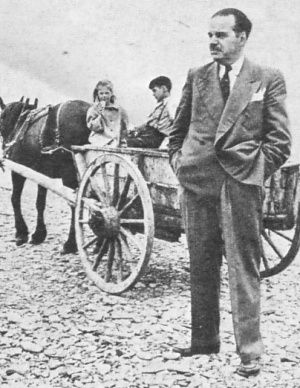 Paul Gouin, leader of the ALN

The current crisis is mainly due to the bad distribution in the economic field, to the greed of high finance and the abuses of all kinds which slipped into the application of the democratic regime. It is useless to hope that balance will be restored by itself and without the assistance of a well-defined method of action. The need for a political evolution accompanied by an economic evolution is obvious. In the United States, the regenerated democratic party, currently tends toward this double transformation. In Canada, and in the province of Quebec, we are still at the level of theories. Our rulers did not yet respond to the reforms of a political, economic and social nature recommended by our most informed minds.

The conflict of jurisdiction between the municipal, provincial and federal powers (a reason which easily becomes a simple pretext), the blind confidence that some of our leaders still place in formulae whose resulting crisis has shown the danger, the harmful influence of the electoral fund, the absence of collaboration between our politicians and our economists, and the inorganization of public opinion, indefinitely delay the carrying out of the most important measures and deprive us of the overall plan which can enable us to remedy the situation intelligently.

We believe that a political evolution is necessary in our country and our province in order to ensure the implementation of the doctrines worked out by our economists.

The Action libérale nationale thus offers the following overall plan which, even if it is not perfect, tends toward this double political and economic evolution, the only means of ensuring a better distribution of wealth, and therefore, to stop unemployment and to put an end to the crisis.

We firmly believe, as many others do, that the effort of economic restoration can be summed up mainly in an effort of rural restoration, based on family agriculture and cooperation. This is why we place land reforms at the root of our plan of action.

The rural restoration, of which we give the broad outline above, comprises a preliminary and thorough study followed by the conception of an overall plan and the coordination of the various ministries and departments concerned: Lands and Forests, Agriculture, Colonization, Transportation, Treasury and Provincial Secretariat. This study, this overall plan, this coordination, it suffices to just study the question even superficially to be convinced of it, cannot be completed by a single man. One needs the disinterested contributions of all competences. This is why we recommend the setting up of a Commission of Agriculture and Colonization made up of independent specialists and civil servant.