Fo Niemi is requested at the restaurant Les Bridés

This is an unofficial translation of an article by Patrick Lagacé published in La Presse on March 18, 2007. 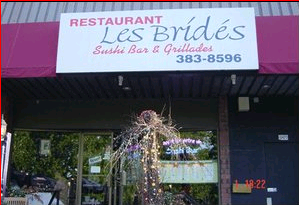 I hope people will forgive me for arriving a little late in this controversy...

And then, English Canada, in the repetition of a play staged one hundred times, jump on the expression and insinuates that Boisclair insulted the Asians by describing them as "slanting eyes". The Anglo newspapers report on the remarks of Boisclair and give echo to the condemnation of certain startled leaders.

You see, "slanting eyes", in English, is an insult. Contrary to "yeux bridés", it is not the simple description of a physical feature. It is a little like "nigger". It is a little like "frog" (or, as one sometimes says West of the Ottawa river, without it starting too much of a fury, "fucking frogs").

What we have here is the convergence of three phenomena. Firstly, Canada's Two Solitudes: the Anglo scribes and lobbyists did not attempt to check if "yeux bridés" was as heavily charged as "slanting eyes". Secondly, a little political correctness: in the end, if Boisclair had said "people, in the sense of persons, coming from this continent going by the name of Asia", he would not have been disturbed. Thirdly, a certain English Canada - I wrote it in the Jan Wong controversy - is certain that the Quebecers are genetically more racist than the average. And they also believe that the separatists are genetically more racist than the average Quebecer.

Take these three things. Make them converge. And you get the fireworks we have seen.

And you know why one uses the charge of racism, do you not? Because it it a little like when a skunk pisses on you. It sticks to your skin, and there is nothing you can do about it. To accuse someone of racism, in public, is the H bomb of arguments. I know what I am talking about. Jack Todd, sports editor at The Gazette, accused me of incenting hatred, a year ago, after having read one of my articles in the JdeM. The problem is, that this asshole of Todd referred to me as "hate mongerer" after he had badly translated a passage of my paper! He had translated my remarks so badly, poor Jack, that his newspaper apologized. That is why charges of racism used without any discernment upset me just a little.

Honestly, when the contempt comes from the tenors of English Canada, well, we are accustomed to it. They read The Gazette to understand Quebec, incapable as they are of reading La Presse, Le Devoir or the JdeM. But when the "convergents" come from here, live here, when they speak in the name of people from here, then, how sickening, how literally disgusting it becomes. There were a few in the "yeux bridés" affair. But here I am talking more precisely of Fo Niemi, director of the Centre de recherche-action sur les relations raciales (CRARR), a very creditable Montreal organization, which issued that the expression "yeux bridés" was - get this - "racialement offensante".

"Racialement offensante"! It is the utmost irony: to comment on what fundamentally is a linguistic misunderstanding, Mr. Niemi uses a calque of English, he uses "racialement offensante", as in "racially offencive", largely used among Anglo-Saxons, when a moron makes a racist comment.

This comment from the boss of the CRARR is especially worrisome. Yes, worrisome because if Mr. Niemi is capable of such an enormous error on this subject, what tells me that his other public position/declarations are not also disconnected/unreal?

Meanwhile, Fo Niemi should be worried. There is, in Ahunstic, on rue Lajeunesse, an Asian restaurant, held by Asians, whose name is "racially offencive". And this restaurant is named Les Bridés. Yes, Mesdames and Messieurs. *

No jokes ! Les Bridés ! A reference to the "yeux bridés" of the Asians.

Question for Mr. Niemi: is the restaurant Les Bridés managed by "racially offencive" people? If you come across them, do not hesitate to ask them the question, I beg you.

* I could be wrong, but a branch of Les Bridés formerly existed at the corner of Mont-Royal and Fullum.